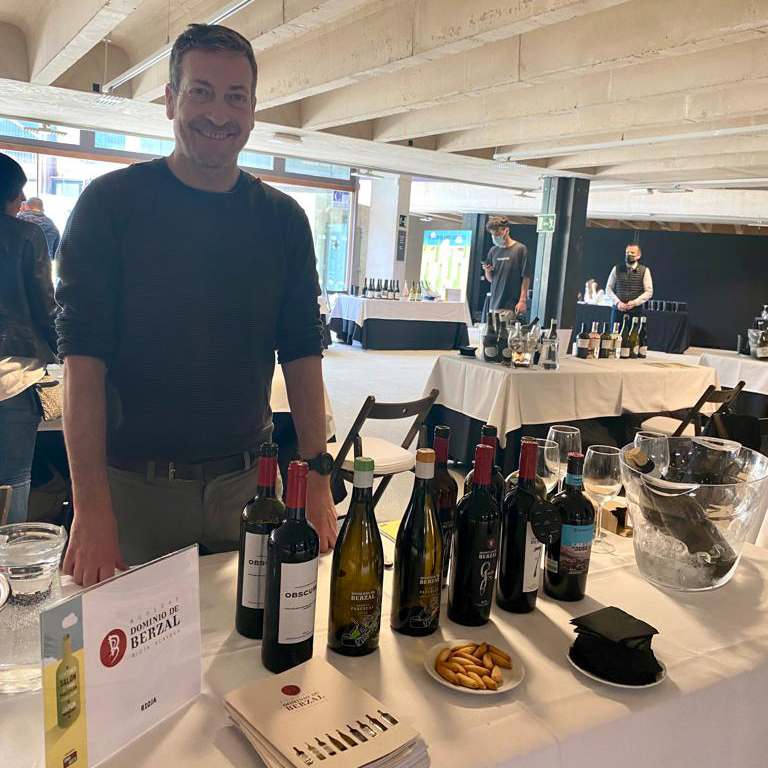 Posted at 12:11h in Vinos by Dominio de Berzal
0 Likes

Bodegas Dominio de Berzal participated as an exhibitor in the seventh edition of the Salón de Vinos Radicales, organised by the Sindicato del Gusto, in Madrid. An event that brought together 33 small wineries and winegrowers who, like us, identify with values such as uniqueness, authenticity, loyalty and the defence of their territory.

In this edition, held on 11 April at its usual venue, the headquarters of the Official College of Architects of Madrid, Bodegas Dominio de Berzal attended with the most recent additions to our “Parcelas” collection, two different and original whites. A Viura and a single varietal Garnacha Blanca that allow us to appreciate the nuances and characteristics of each of these two varieties. Two very gastronomic wines from the 2020 vintage, which is considered a very good vintage. Both are limited editions: 1,800 bottles of Parcelas Viura and 1,900 bottles of Parcelas Garnacha Blanca.

Alongside them, Bodegas Dominio de Berzal came to this Show with a whole arsenal of unique and “radical” wines, such as Las Laderas de José Luis Viñedo Singular, a 100% Tempranillo made from hand-picked and selected grapes from the singular vineyard plot ‘Las Escaleras’; Dominio de Berzal 7 Varietales, an authentic wine with the special uniqueness given by its seven varieties maturana, graciano, garnacha, merlot, cabernet sauvignon, syrah and prieto picudo; Dominio de Berzal Selección Privada, the maximum expression of the tempranillo grape from Rioja Alavesa in this signature wine with modern nuances, personality and strength; Dominio de Berzal Graciano, the pure essence of a rare, singular and demanding variety with which we aim to make a different wine or the new vintage of Dominio de Berzal Maceración Carbónica 2021.

In addition, this meeting with professionals and the specialised press also served to preview and exchange opinions on some of the new products that will be launched on the market in the near future. Among them, Obscurio, a recently bottled and undoubtedly radical wine that, according to what was experienced at this Show, will not leave anyone indifferent.

Already consolidated as an essential event to get to know the other side of Spanish wine, the Salón de Vinos Radicales is a meeting where small producers faithful to the autochthonous varieties and to the character transmitted by the soils and the climate are defended and made visible. This annual event is promoted by a group of professionals in wine and food journalism, photography, design, architecture and publishing, who call themselves the “Sindicato del Gusto” (Taste Syndicate).

In its first edition, held in 2015, this special syndicate unveiled what would be its roadmap, christened the Manifesto of Radical Wines, focusing on the work of “the last Mohicans of world viticulture in the 21st century (…) small producers, who work their vineyards with their own hands”.

As this manifesto states, radical wines are neither exclusive nor sectarian; on the contrary, they accept any methodology that allows the winegrower to remain true to his roots. In line with this groundbreaking and open-minded vision, the Radical Wines 2022 show focused on the possibilities of other raw materials, beyond grapes, to make different “wines”. The opening tasting by Carlos Echapresto, sommelier and owner of Venta Moncalvillo and his “honey wines” from Moncalvillo Maedery, was a good example of this.

The participation of Japan as guest country in this VII Salón de Vinos Radicales also linked with this conception of wine, beyond the grape.


We use cookies on our website to give you the most relevant experience by remembering your preferences and repeat visits. By clicking “Accept All”, you consent to the use of ALL the cookies. However, you may visit "Cookie Settings" to provide a controlled consent.
Cookie SettingsAccept All
Manage consent

This website uses cookies to improve your experience while you navigate through the website. Out of these, the cookies that are categorized as necessary are stored on your browser as they are essential for the working of basic functionalities of the website. We also use third-party cookies that help us analyze and understand how you use this website. These cookies will be stored in your browser only with your consent. You also have the option to opt-out of these cookies. But opting out of some of these cookies may affect your browsing experience.
SAVE & ACCEPT